Posted on July 20, 2016April 8, 2019 by Online Editor
The targeted killing of alternative voices, intimidation, religious bigotry, suppression of women, intimidation and killing of artists, State censorship, and fear of terrorism have done serious and irreparable damage to culture and freedom of expression in Pakistan, and have created the conditions for the further exacerbation of the ongoing war within Islam, says Ambreen Agha 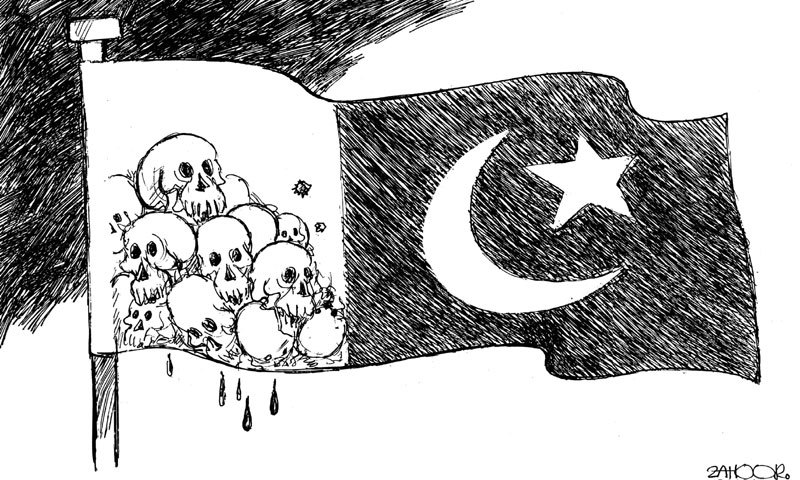 Haqqania seminary is known for its links with the militant Taliban. This is nothing but legitimization of militancy and the Taliban that will undermine the nation’s resolve to fight militants to the finish. Although the National Action Plan calls for disallowing banned outfits from resurrecting, yet they have resurrected and are openly promoting their militant agenda with impunity… is the revival of the jihadiproject by design or by default?

The release of state funds to private seminaries was routine before 2002. The Former Secretary of Religious Affairs, KP, Vakil Khan, thus observed, “Before that (2002), a fund was set up for seminaries during the Zia era and that was from Zakat, not tax revenue.” Further, KP Provincial Minister of Higher Education and Information Mushtaq Ghani, on June 22, 2016, noted that this had been a practice during the Muttahida Majlis-e-Amal (MMA) Government (2002-07), an alliance of religious parties, and was only resumed by the current PTI administration.
MMA’s alliance of six religious parties enjoyed an absolute majority at both Provincial and Federal levels after the ‘managed’ elections of 2002, under the Pervez Musharraf dictatorship. On 25 November 2002, the pro-Taliban MMA formed the Government in KP, after the alliance’s huge success in the Province, at both the Provincial and National level. After taking control of the Province, the Islamist political alliance banned music on public transport, medical examinations of women by male doctors, male coaches for women athletes, male journalists from covering women’s sports, and orchestrated the destruction of the music market in Mingora and other areas of Swat District. The MMA Governments directives led to the closure of shops dealing in musical instruments.
In the wake of the intensified attacks on music centres the MMA Government banned all cultural activity and laid down a deep foundation for puritanical Islam and religious militancy. This alarming trend gradually gathered momentum across Pakistan, leading to raids on theatres in Lahore and illegal detention of performers on fake charges of ‘indecency’ and ‘vulgarity’.
The atmosphere of extremism and impunity that dominates the cultural landscape in Pakistan has also given rise to increasing crimes against women and a continuous stream of ‘honour’ killings. The latest incident involved both cultural censorship and the deep rooted misogyny that underpins this phenomenon. On July 15, 2016, Fouzia Azeem alias Qandeel Baloch (26), a model, actress, and social media celebrity, was strangulated to death by her brother Waseem Baloch in the Multan District of Punjab Province to ‘protect family honour’. While confessing his crime, Waseem stated that he killed Qandeel because she brought “dishonour to the Baloch name” by posting risqué videos and statements on social media. This phenomenon of honour killings has claimed thousands of lives across Pakistan. According to the Human Rights Commission of Pakistan (HRCP) database, a total of 1,096 women were killed in cases of honour crimes in 2015 alone; another 1,005 in 2014; and 869 in 2013. The primary reasons for these killings have been alleged illicit affairs, exercising the right of choice in marriage and domestic disputes, but the underlying cause, as one commentator on the Qandeel Baloch killing observed, is “because we hate women who don’t conform.”
The current revival of the jihadi project is both by “design and default”. Former HRCP chairperson Asma Jahangir points to “unnerving tales of how politics empowered bigotry, laws were used for persecuting religious minorities and liberal Pakistanis, and how an easy-going Muslim population was turned into an insufferable “puritanical” society.” The targeted killing of alternative voices, intimidation, religious bigotry, suppression of women, intimidation and killing of artists, State censorship, and fear of terrorism have done serious and irreparable damage to culture and freedom of expression in Pakistan, and have created the conditions for the further exacerbation of the ongoing war within Islam.
Ambreen Agha is a Research Associate with Institute for Conflict Management, New Delhi, India

The Kashmir Telegraph is the publication of Pune-based, not for profit, think-tank, Kashmir Bachao Andolan. Write to us at editor@kashmirtelegraph.com