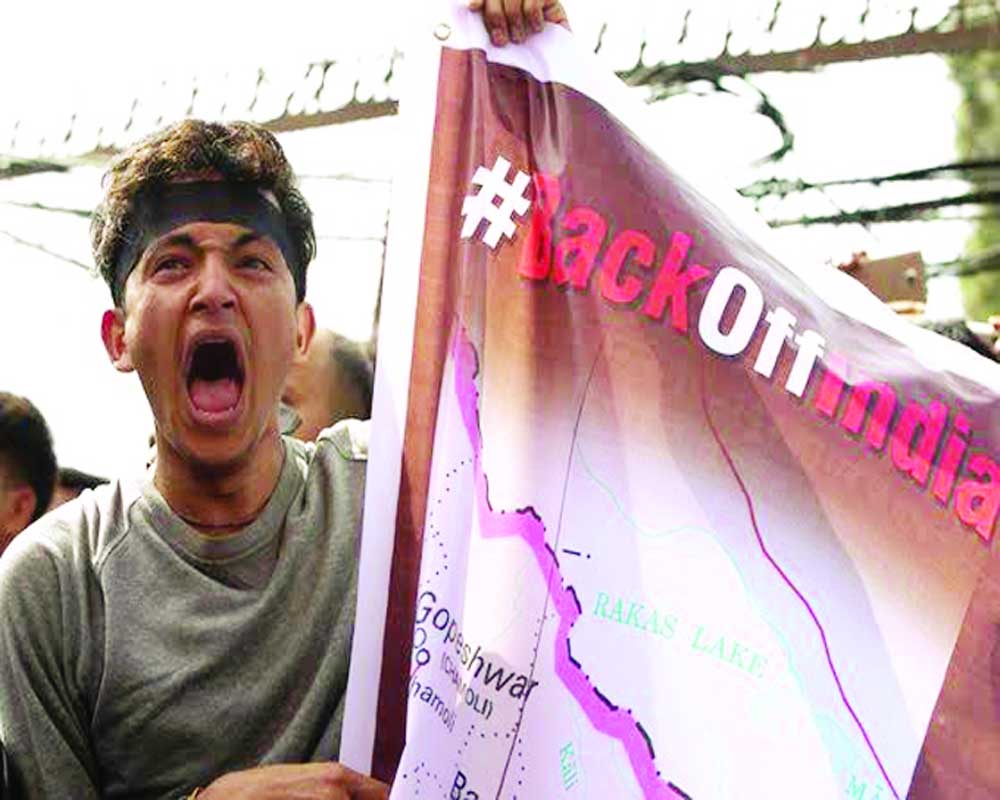 The concurrent rise of China and the communist parties of Nepal in South Asia is a fundamental shift in negating India’s primacy in Kathmandu. We must scale up ties in the neighbourhood, says Ashok K Mehta

Who would have ever imagined that effigies of Prime Minister Narendra Modi, who had conquered the hearts and minds of most Nepalese in 2014, would be burnt across Nepal? (There’s some consolation though that while the Red Star is over Nepal, Chinese President Xi Jinping’s effigies, too, were set on fire in that country last month). The provocation was the first political map of India that was released last month, which depicted the reorganised Union Territories of Jammu & Kashmir with Pakistan-occupied Kashmir shown in Jammu & Kashmir and Gilgit-Baltistan in Ladakh.

The map reportedly depicts the highly-emotive issue in Kathmandu, the disputed Kalapani territory, in India. An Indian foreign office official said, “The new map has in no manner revised our boundary with Nepal.” The Chinese have allegedly encroached into four to five areas, usurping more than 25 hectares of land. The pan-Nepal revival of Kalapani has stirred the pot of anti-India sentiment that was settling down after the 53-day economic blockade of 2015, which catapulted the Nepal Communist Party (NCP) into unprecedented political power.

The Kalapani dispute has, as is usual, a Nepali and Indian version. The former claims that the Kali river originates at Lipulekh whereas the latter contends that its source is at Kalapani. The tri-junction between China, India and Nepal is also contested: Tinker-Lipu versus Lipulekh. India says  Nepal and China have bilaterally shifted it  about 6 km north. Indian posts at Kalapani and Navidang routinely patrol till Lipulekh. The Kalapani dispute is ancient and a sensitive issue for the Nepalese. Joint/boundary working groups and technical committees have failed to resolve the dispute. According to Nepal’s Foreign Ministry, “The two foreign secretaries were tasked to resolve border-related issues with concerned technicians.” I have been travelling in Nepal for the last two weeks. The by-elections held on Saturday to elect 52 representatives were not the only reason why Kalapani has become a hot potato and requires early resolution.

Xi’s landmark visit to Kathmandu, the first by a Chinese leader in 23 years, was well timed though it raised the hackles in New Delhi. The concurrent rise of China and the communist parties of Nepal in South Asia is a fundamental shift in negating India’s primacy in Nepal (and the region) by reducing Kathmandu’s dependence on India. New Nepal is secular, democratic, federal and a republic. Monarchy, which unified Nepal 250 years ago, was abolished due to the 10-year-long Maoist insurgency and 19 days of street protest in 2006. Globalisation has affected Nepal in a big way. Around 25 per cent of its population is abroad. Connectivity and urbanisation have changed social contours and nationalism is at an all-time high though economic prosperity has not matched the aspirations of the people.

For India, Nepal is geostrategically the most important country in the neighbourhood. That is why Prime Minister Modi visited it for an unprecedented four times during his first term. No Indian Prime Minister had been there for the past 17 years.

India has lately been  focussed on Nepal’s development agenda, dovetailed with a stable Nepal and a prosperous one. Emphasis is on trade, hydel power projects, business, tourism and substantial improvement of border infrastructure. Dozens of my reports in the 1970s and 1980s to the Government, urging better border connectivity, went unauctioned when the Nepali side was getting roads ahead. The bottom line for India is to deliver projects on time with quality perfection so as to match and better China.

Of Nepal’s total trade of $13.5 billion in 2017-18, 65 per cent was with India and just 14 per cent with China. The Indian embassy in Kathmandu has prepared a handbook for Indian investors in Nepal. It is not easy doing business in Kathmandu, which is expectedly a highly-protected economy though OYO, which entered Nepal in 2017, has now established 120 outlets. As far as tourism is concerned, Indians remain the number one though in Kathmandu, a fading Shangri-La is competing with Bangkok and Dubai. Border trade has immense scope but has not been exploited due to roads still rotting on the border. India’s aid to Nepal increased by 73 per cent — from Rs 375 crore in 2017-18 to Rs 650 crore in 2018-19 — but we are yet in no position to match China’s deep pockets. Beijing pledged around $500 of development aid for the next two years during Xi’s visit. Another $23 million have been given for military stores.

The numbers of integrated checkposts are being expanded — one at Kakarbhitta and the other at Biratnagar — which is to be inaugurated shortly by Prime Ministers Oli and Modi. A new bridge has been built over Mechi river near Kakarbhitta, which will expedite movement into east India. India has already submitted to Nepal a project report on the 113-km Raxaul-Kathmandu railway line. The other rail line from Jayanagar to Janakpur has been completed and is being extended to Bardibas in Nepal.

The Motihari-Amlekhgunj oil pipeline was constructed six months ahead of schedule, making petrol Rs 2 per litre cheaper in Nepal. Of the nation’s  28 million population, 25 per cent is abroad, looking for greener pastures. Around six to eight million people reside in India and are gainfully employed.

Chinese-aided/constructed projects are grouped broadly into two categories: The Belt and Road Initiative (BRI) projects, estimated to cost $8 billion, which include the Trans Himalayan Connectivity Network and three north-south corridors. Another is a basket of 35 projects worth $10 billion under consideration or project review. China has opened a commercial office in Kathmandu from which Nepal, as a member of the Asian Infrastructure Investment Bank, can secure loans. Unsurprisingly, there is little transparency on the grants and loan components and interest rates. China’s track record in supporting infrastructural development is suspected and can lead to a debt trap.

Nepal ideally wants a triangular economic growth model, maximising its dividend from the two fastest-growing economies of India and China, but New Delhi prefers a bilateral relationship unlike Beijing, which promotes India-China plus one which Prachanda, the executive Chairman of the Nepal Communist Party, rejected last week. Neither Kathmandu nor Beijing has taken New Delhi into confidence about China’s trans-Himalayan connectivity network. Nor is there any clarity on the Raxaul-Kathmandu railway. Both railway lines are huge geological and ecological challenges with costs outweighing benefits.

The extension of the Chinese railway line to Lumbini will breach an old Indian red line for Chinese projects in the Terai. Deeper military cooperation between the People’s Liberation Army (PLA) and the Nepal Army is another troubling threshold for the Indian Army. Nepal’s “Look North” policy contains the seeds of serious security challenges for India. But the immediate concern must be to resolve, for mutual satisfaction, the long-festering Kalapani dispute through high-level dialogue and arrest the anti-India sentiment.

This site contains copyrighted material the use of which has not always been specifically authorized by the copyright owner. We are making such material available in our efforts to advance understanding of political, human rights, economic, democracy and social justice issues, etc. We believe this constitutes a ‘fair use’ of any such copyrighted material. The material on this site is distributed without profit to those who have expressed interest in receiving the included information for research and educational purposes.